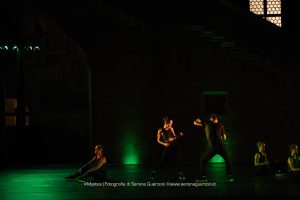 Jessica Capanni began dancing in 1994 at the age of 4 and a half years at the school “Centro Studi Danza” in Grassina directed by Maria Grazia Nicosia.
Since 1997 she has studied at the Dance Studio school in Florence directed by Mauro Barbi and Monica Benesperi. In this school she started Jazz with Sarah Siliani, Clara Sonnati and, since 2004, with Deborah Zucconi. In 2003, together with the teacher Deborah Zucconi, she resumed Danza Classica until 2006.

She began studying Hip Hop in 2000 with Luca Miniati, then in 2001 with Sara Berardi and from 2005 with Gigi Nieddu.
Italian Hip Hop Italian Champion in 2003 and 2004, and again in 2004, winner of the Italian and world couple championships.Italian championship of Caribbean dancing in 2005 and 2006.

Since 2008 Teacher Hip Hop in different dance schools of Florence